Artwork ready for the Merriwa silos 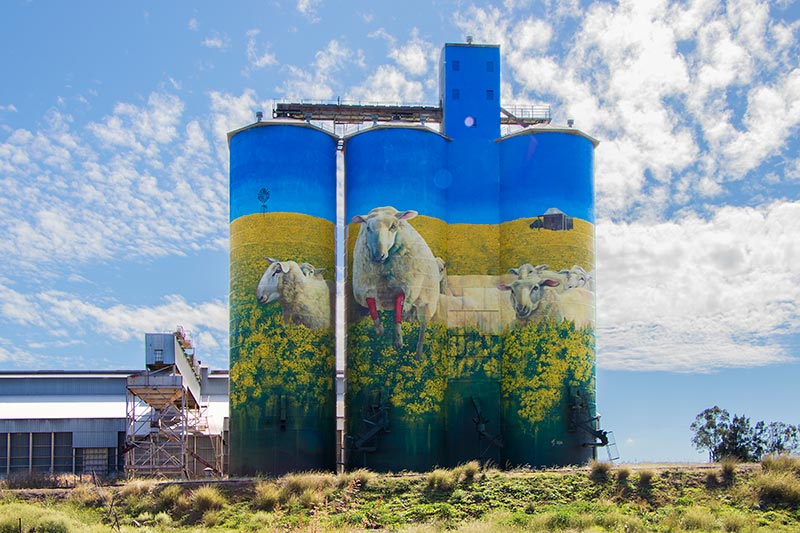 Upper Hunter Shire Council is commencing a large scale public artwork in April, on the GrainCorp silo facilities in Merriwa.

This will be the first artwork to grace a GrainCorp site in New South Wales.

The image was chosen by the Merriwa community, who voted on their favourite from three possible designs.

An image of sheep in red socks, standing in a field with a hut and windmill in the background attracted the largest number of votes and so was chosen by the Committee.

Mayor Wayne Bedggood thanked the Merriwa Tourism and Promotion Committee for their ongoing work and GrainCorp for their agreement to partner in the public art project.

Chair of the Committee Cr Ron Campbell said the silos art will be an attractive and eye-catching marker for Merriwa.

“This will be a great tourist attraction visible from the Golden Highway.

“All stakeholders are very excited for the project to get underway,” Cr Campbell said.

GrainCorp Senior Manager of the Northern Supply Chain Josh Connell said the project would hopefully be the first of many more silo art installations for New South Wales.

“It’s great to promote the town of Merriwa on the tourist map and we are very proud to provide the canvas for this eye-catching design,” he said.

“The artwork is unique to this area and injects a local element to the silo art trail. We’re looking forward to adding to the trail on GrainCorp sites throughout New South Wales in the coming years.”

The creation of large public art projects including silo art, was one of the highest priorities identified in Council’s Merriwa Town Centre Masterplan based on consultations with the Merriwa community in 2015.