Why is Burning Mountain Nature Reserve so special? 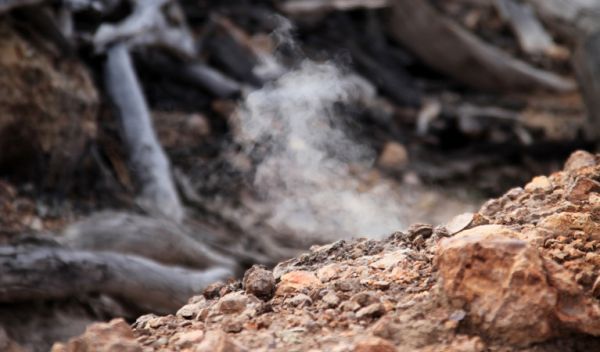 Burning Mountain is a rare phenomenon – a coal seam, buried 30 metres underground, which has been burning for at least 5,500 years, some say over 15,000 years. The experience is a pleasantly energetic walk of 4 km (return) through bush land which becomes increasingly bare and barren the closer the visitor gets to the smoking vent. It is a true rarity and an opportunity to experience the hills at the northern edge of the Hunter Valley district.

The area was occupied by the Wanaruah people and it has been suggested that “Wingen” means “fire” in their language. There is some evidence that they used its heat for warmth in the winter months, for cooking and for the manufacture of tools. The name of the mountain is an apt description although it is actually a “smoking” mountain. It is derived from the perpetual sulphurous smoke which emerges from fissures in the ground.

Traditionally, Burning Mountain was part of a vast territory owned by the Wanaruah people, which stretched from Broke to the Liverpool Range. Wanaruah mythology, passed through generations, tells the story of Burning Mountain like this: one day, the Gumaroi people, north of the Liverpool Range, sent a raiding party south to steal Wanaruah women. The Wiradjuri people to the west warned the Wanaruah, who sent their best warriors out for a great battle. One of the Wanaruah wives decided to wait for her husband to return, settling down near the Liverpool Range. When he didn’t come back, she was devastated. Crying, she asked Biami, the sky god, to take her life. Instead, he turned her into stone, and as she did so, her tears became fire and set the mountain alight for all eternity.

The scientific explanation for Burning Mountain is a slowly combusting coal seam. At the moment, the exact location of the fire is a mystery, though we know it’s about 30m below the ground and heading south – meaning Burning Mountain actually moves at about 1m a year. It’s estimated the fire has been burning for as much as 5,500 years, and as it eats through the coal, rocks slip into the gap, causing fissures and slumping at the surface level. It is now known that it has shifted nearly 190 m since 1828. It is believed that the coal seam was once on the surface and experts have speculated that a bushfire may have ignited it. Equally it is known that sulphur is capable of spontaneous combustion and this may have started this rare phenomenon.

Be sure to wear sturdy footwear and stay on the formed track. Not only that, but watch out for fossils, too: 200 million years ago, this entire area was covered by ocean.

It is widely accepted that the first European to see the smoke was a farm hand named Smart in 1828. He was working at Cressfield Station about 9 km to the south. He thought it was a bush fire but when it stayed in the same place for days he went and explored. What he saw was unlike anything he had seen before and he declared there was a volcano. By March 1828 it had made the Sydney newspapers and expeditions were sent out to explore the phenomenon.
By 1829 geologists had determined that it was a burning coal seam and that the coal was part of the 235 million year old Greta Series which was part of the main coalfields which existed in the Hunter Valley.

It was known that the burning process, because it was 30 metres below the surface and had very limited oxygen, was no more than one metre a year. The direction of the movement was southwards and it was determined that it had moved about 6 km since it started. On that basis it was estimated that the coal had been burning for around 5,500 years. Some sources claim it is 15,000 years old and others claim it is even older because there have been times when it has not burned at all.

Burning Mountain walk is the best way to discover this unusual nature reserve, with information panels along an accessible 4km return track that has some steep sections.

You would expect a fire sizzling below ground for 5,500 years to have some fairly dramatic effects on the vegetation, and the remarkable phenomenon of Burning Mountain is reflected in the plants and animals adapted to life around it. As you set out from the carpark on a moderate walk to the head of the coal seam, expect to pass through eucalypt groves and other types of Upper Hunter woodland. Plenty of dead trees and hollow logs provide homes for lots of wildlife.

As the fire moves one metre every year, the landscape changes: red gums grow along subsidence cracks, and later you’ll come across narrow-leaved stringy bark, tea trees, and stunted grey gums. There are loads of birds in the area, too, so bring the binoculars if birdwatching is an interest.

Anybody interested in the story of what’s going on below ground won’t be disappointed either: information panels along the track unpack the story of Burning Mountain, including its science and fascinating Aboriginal heritage. A viewing platform is located at the climax of Burning Mountain walk, providing a safe vantage point to view the exhaust vents and rocks transformed by extreme temperatures.